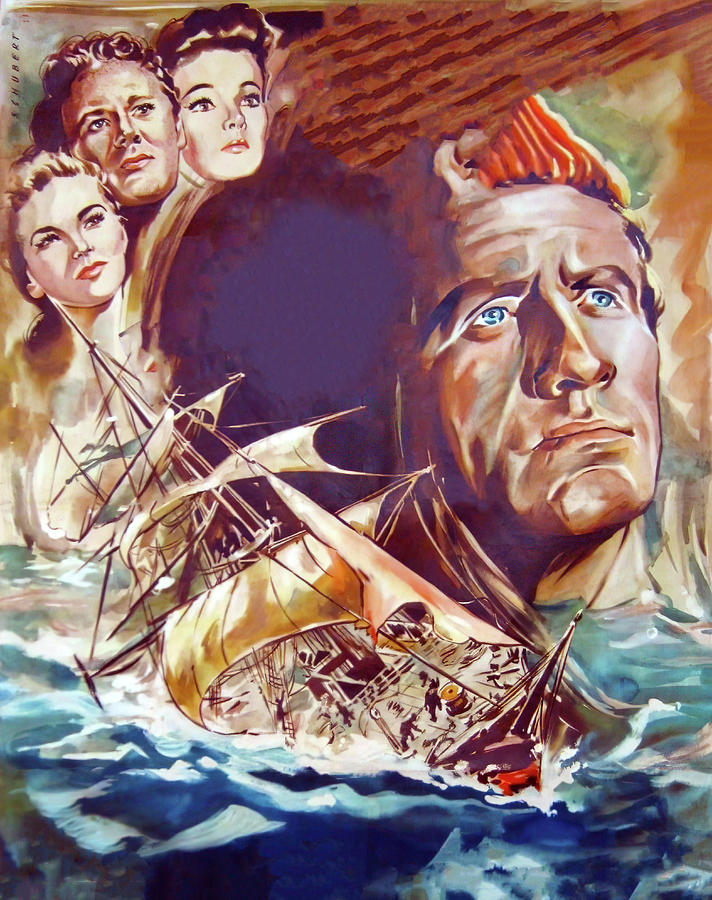 Base painting of the vintage movie poster for ''Plymouth Adventure'', 1950, with Spencer Tracy and Gene Tierney.

Base art is the poster artwork after the text has been digitally removed. It thereby closely recreates the original painting used for the poster. As practically all those original paintings have been lost, a recreation attempts to display the original art before the movie studios added descriptive text. See also our collection "Movie Poster Base Paintings."

Georg Schubert (1911-2005), born in Rosenheim, was a German painter and graphic artist. He studied at the Munich Art Academy, followed by the Academy of Fine Arts in Berlin. His style became representative of the Munich School. He quickly moved up the ranks by winning poster competitions and befriending and working with artist Heinz Schulz-Neudamm on film advertising.

In a unique glance, Schubert captures perhaps the most fascinating aspect of cinema: magic. Like those captured by the movie camera, the worlds he creates in his movie posters are sparkling and dreamy. The cold and pastel chromatic tones give the entire atmosphere a romantic and delicate allure. The use of a particular shade of blue tending to indigo makes his background almost crystal clear. Created with touches of color particularly focused on the bright use of white, his characters shine as if under the spotlight.

His lengthy career brought him notable success: he was awarded a gold medal at an international art exhibition in Paris and received other badges of honor. Many of his original poster designs are on display at the German Film Museum in Frankfurt.

From 1950 to 1975, he lived in Wiesbaden, where he took part in the annual exhibitions of the Künstlerbund in the fountain colonnade, the Biebrich Castle, and the Villa Clementine in the house of the Hessian state government. He was also a member of the Munich Artists' Cooperative. Schubert's works have been exhibited in Bonn, Paris, Strasbourg, Baden-Baden and San Francisco.

In addition to his notable work on film posters and cinema graphics, he became a recognized landscape painter and portraitist.

Search for "Schubert" to see other works.