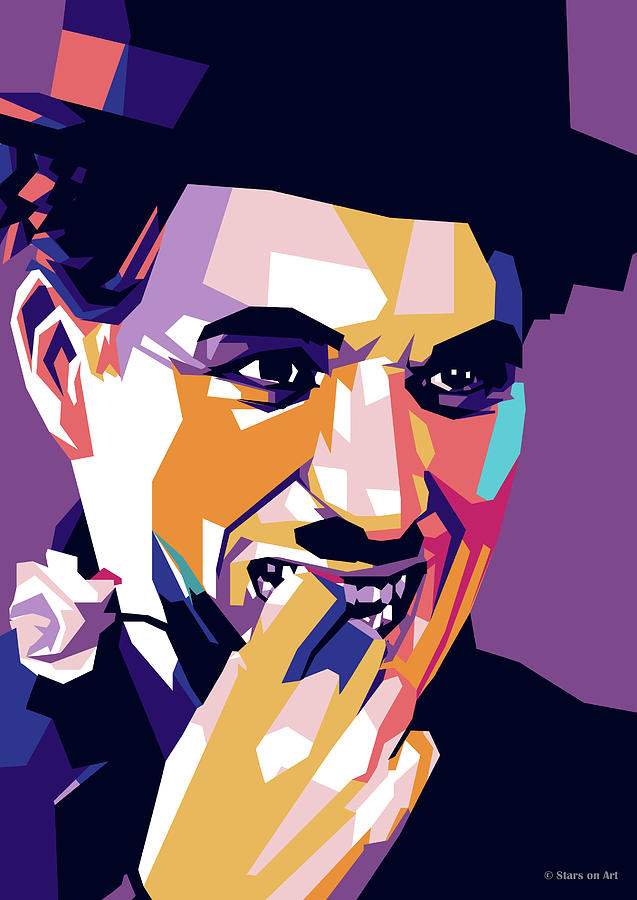 Pop art portrait of Charlie Chaplin in ''City Lights'' (1931). Charlie Chaplin (1889-1977) was a British-born American comic actor, filmmaker, and composer. He achieved fame in the era of silent film, and a worldwide icon through his screen persona as The Tramp. Some considered the most influential characters in film history. His career lasted more than 75 years, from childhood in the Victorian era until a year before his death in 1977. During that time, he encompassed both adulation and controversy.

After his mother's career acting on stage failed. His father had died earlier. Charlie and his brother Sydney Chaplin suddenly found themselves hungry, roaming the streets of cockney London, while their mother suffered a complete breakdown in an asylum. The boys resorted to dancing on the streets and passing a hat for pennies, were placed in an orphanage for impoverished children.

After he moved to America, he soon began directing his films. By 1918, he was the best-known movie figures worldwide, recognized for his screen character, playing the invincible vagabond, the resilient little fellow with an eye for beauty and a pretense of elegance who stood up heroically and pathetically against overwhelming odds and somehow triumphed. In films such as "The Rink," "Easy Street," "The Immigrant," and "The Adventurer," Chaplin proved himself capable of moving his audiences from laughter to tears with a subtle gesture or a bold sweep of movement, as graceful as a ballet dancer.

In 1919, he co-founded the film company United Artists which gave him complete control over his films. His partners were Mary Pickford, Douglas Fairbanks, and D. W. Griffith,

Chaplin wrote, directed, produced, edited, starred in, and composed the music for most of his films. His films usually included slapstick and pathos, portraying the Tramp's struggles against hardship. Social, political, as well as autobiographical elements were seen in his films.

"The Kid" (1921) was hailed as a masterpiece and was second only to "The Birth of a Nation" in box-office returns. "The Kid" revealed Chaplin's growing tendency to inject sentiment into his films. This tendency would later result in bittersweet pathos, an echo of his Dickensian childhood's haunting memories. Chaplin was by now an international celebrity, known and beloved the world over.

"The Gold Rush" (1925) is also considered by some to be his greatest masterpiece, containing some of the most memorable moments of comedy and pathos in his entire body of work.

He received an Honorary Academy Award in 1972, as part of a renewed appreciation for his work. His early films still rank on lists of the greatest films of all time.
(credit: Wikipedia)

Congratulations on your recent sale!

Warm congratulations on your great art and this sale!

Congrats on your sale! L/F

Congrats on your sale!!