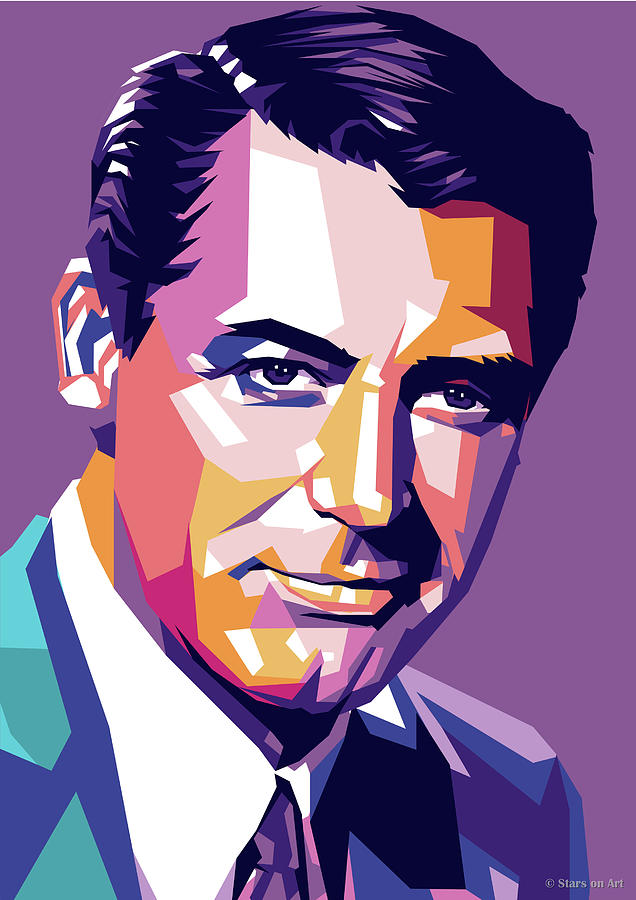 Pop art portrait of Cary Grant.
Cary Grant (1904 -1986) was a British-born American actor who became one of Hollywood's leading men. He was ranked as the second greatest male actor by the American Film Institute, behind only Humphrey Bogart.

Critics remember him for his extensive appeal as a handsome, suave actor. He did not take himself too seriously, able to play with his dignity in comedies without sacrificing it entirely.

In the 1920s, he acted in New York vaudeville stages before moving to Hollywood in the early 1930s. He was prominently cast as the man in the life of married Marlene Dietrich in Von Sternberg's "Blonde Venus." Mae West then gave his career a lift when she chose him as her co-star in "She Done Him Wrong."

Within a few years, Grant became established as an appealing straight romantic leading man. He then performed in romantic and screwball comedies such as "The Awful Truth" (1937) with Irene Dunne, "Bringing Up Baby" (1938) with Katharine Hepburn, "His Girl Friday" (1940) with Rosalind Russell, and "The Philadelphia Story" (1940) with Hepburn and James Stewart. Those films are among the greatest comedy films of the Hollywood Golden Age.

Overall, he received five nominations for the Golden Globe Award for Best Actor, for "Indiscreet" (1958) with Ingrid Bergman, "That Touch of Mink" (1962) with Doris Day, and "Charade" (1963) with Audrey Hepburn.

His screen personality, a super-sophisticated, witty, casual, debonair man-about-town at odds with an upside-down world, made Grant a perennial favorite of cinema audiences for more than three decades. Grant's youthful charm and mastery of his particular style kept the handsome man top man on the Hollywood totem pole of romantic leads.
(credit: Wikipedia)

Art provides an opportunity for kaleidoscopic thinking. Each time we shift the lens of our perceptions, we gain new perspectives — and new opportunities for innovation. CONGRATULATIONS ON YOUR RECENT SALE OF AN WONDERFUL WORK!

Congratulations on your sale