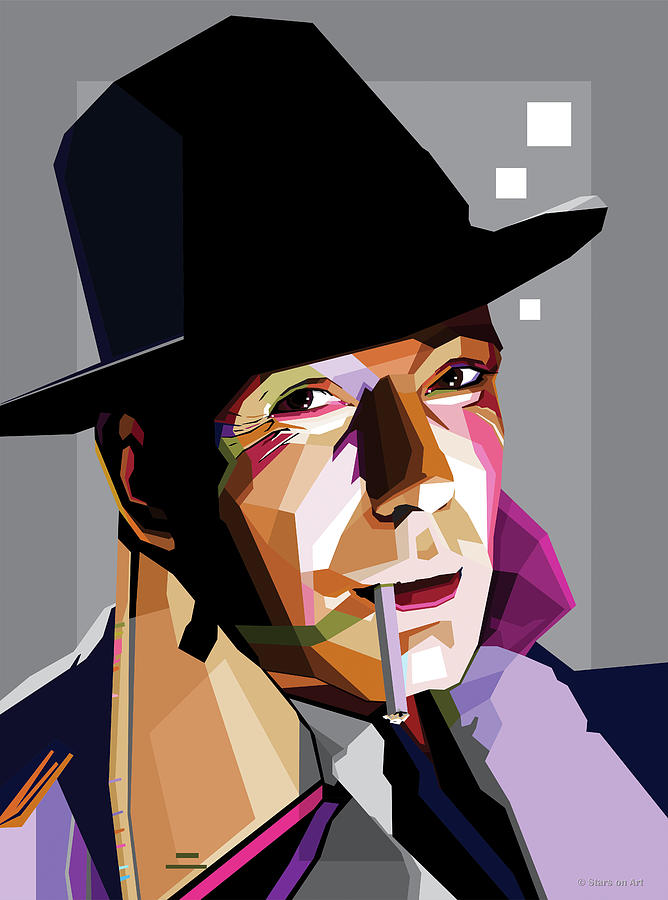 Pop art portrait of Humphrey Bogart (1899-1957). Between 1936 and 1940 he appeared in no less than 28 feature films, mostly in standard gangster parts, often as the villain. He also appeared in two Westerns.

A turning point was 1941, the beginning of the "Bogey" legend. Screenwriter John Huston provided the impetus, with the script of “High Sierra,” in which Bogart gave a remarkable performance as a gangster with soul. Later that year Huston, in his debut as a director, guided Bogart into his tour de force as the ruthless private eye Sam Spade in the excellent thriller “The Maltese Falcon.”

Bogart sustained a peak of popularity through such films as “Casablanca,” “The Big Sleep,” and “Key Largo.” On the set of “To Have and Have Not” he met and fell in love with—and later married—his co-star Lauren Bacall. In 1947 he played one of his most memorable parts, under the direction of John Huston, as the greedy, paranoid prospector in “The Treasure of the Sierra Madre.” During the 1950s he extended his acting range as he had never done before with widely diverse roles in such films as “In a Lonely Place,” “The African Queen,” “The Caine Mutiny,” “Sabrina,” and “The Barefoot Contessa.” He won the Academy Award for his captivating performance in “The African Queen.”

The lonely, self-reliant, brooding, sardonic, skeptical, and cynical image of Bogart was resurrected in the 1960s by millions of fans the world over and is still celebrated in a huge "Bogey" cult in the form of posters and retrospective film festivals. An unlikely movie star but a very credible antihero, he left a lasting mark on film history.

💖💖💖“An art is a poem without words”💖💖💖 Congratulations on your recent sale of this amazing Work!

Congratulations on your sale of this wonderful artwork! Fl

Nice! Congratulations on your sale!